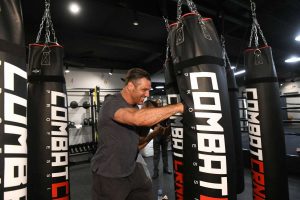 Savarese, originally from New York, won two New York Golden Gloves championships during his amateur career and turned professional in 1989. His overall boxing record was 46 wins and 7 losses, with fights against popular boxers such as George Foreman and Mike Tyson.

Savarese now resides in Houston. Savarese Fight Fit in West University Place, located at 4215 Bellaire Blvd., is the second gym he has opened in the Houston area, with the first located downtown at 1612 Austin St.

“I was always around gyms,” Savarese said. “I was a gym rat, as they say. I love the atmosphere and I love being around people.”

Savarese continued, “I love sharing what I know about boxing. I have a passion for it.”

Savarese notes that boxing is a functional workout because a person will get full resistance training, and its a good way to integrate cardio.

“It gives people a lot of confidence to help defend yourself, too,” Savarese said.

People can sign up for either group or private training classes. Classes will have two trainers for no more than 12 people, so Savarese says that all the classes feel like private classes.

Classes include a 50-minute fight fit group class, where trainers will guide you through series of bag work combos, weight training, and pad work, 30-minute partner pad sessions with two people and a trainer, and a 50-minute fight fit kickboxing class. Classes are available for all levels of experience.